Abstract:
Internet of Things (IoT), an ever-growing network of billions of devices embedded within physical objects, is revolutionizing our daily life.  At present, the IoT devices in the edge are primarily responsible only for collecting and communicating the data to the cloud, whereas the computationally intensive data analytics takes place in the back-end cloud server.
However, the data privacy and the connectivity issues - in conjunction with the fast real-time response requirement of certain IoT applications - call for smart edge devices. These devices should be able to support privacy-preserving, time-sensitive computation for machine intelligence on-site and rely on the cloud only for offline data processing away from the critical path. The prevalent general-purpose processors in the edge devices are not equipped with sufficient compute power or energy-efficiency to provide the necessary computational intelligence. In this talk, I will present the design of ultra-low power programmable accelerators that overcome these challenges and speed up computation to realize the edge analytics vision.

Bio:
Tulika Mitra is a Professor of Computer Science at School of Computing, National University of Singapore (NUS). Her research interests span various aspects of the design automation of embedded real-time systemswith particular emphasis on energy-efficient computing, heterogeneous computing, application-specific processors, and software timing analysis/optimizations. Her research has been recognized by best paper award at FPT 2012 and best paper nominations at DAC (2016, 2012, 2009), DATE 2017, VLSI 2013, CODES+ISSS 2008, FPL 2007, ECRTS 2007, and CASES (2016, 2007). Prof. Mitra is the recipient of the Indian Institute of Science (IISc) Outstanding Woman Researcher Award 2017 and she is a Distinguished Visitor of the IEEE Computer Society. She currently serves as the Deputy Editor-in-Chief of IEEE Embedded Systems Letters, Senior Associate Editor of ACM Transactions on Embedded Computing Systems, Associate Editor of IEEE Design & Test Magazine and EURASIP Journal on Embedded Systems. She has served as Associate Editor of IEEE Transactions on Computer-Aided Design of Integrated Circuits and Systems in the past and member of theorganizing, program committees of several major conferences in embedded systems, real-time systems, and electronic design automation. 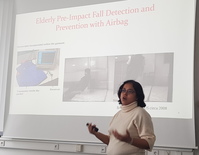